There was another good turnout for MRATHS’ latest meeting with intriguing rocks, crystals, and a “strange contraption” on display.  We saw photographs and heard stories behind several historical events that had recently come to light.  There were also updates on various events, including school visits to enthuse subsequent generations, and plans for upcoming exhibitions showing our rapidly increasing activities.

The main event was Professor Meirion Lewis’ talk on Military and Civil applications of Surface Acoustic Wave (SAW) devices.  He provided the history and explained how SAW devices work, helpfully using pictures with hints at the underlying mathematics and physics. His long-held passion for the subject was evident and he interspersed his fascinating story with humorous anecdotes.  Following refreshments and informal discussions / reminiscences along with an opportunity to play with the “strange contraption” – a coupled oscillator whose actions surprised many – Meirion continued with a run-through of SAW applications (many of which involved people in, or known to, the audience) and the intrigues of creating and defending patents.  We were amazed to learn billions of SAW devices are now built into mobile phones and other devices. 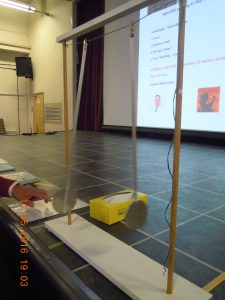