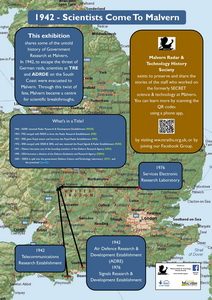 In March 1942 and with almost no notice, more that 1,500 scientists, draftsmen, engineers and clerical staff were moved from 2 Top Secret Research Establishments on the South Coast to Malvern. They came from the Telecommunications Research Establishment (TRE) at Worth Matravers near Swanage and the Air Defence Research and Development Establishment (ADRDE) at Christchurch near Bournemouth. These two organisations were responsible for Radar (Radio Detection And Ranging), or RDF (Radio Direction Finding) as it was known at the time.  RDF had played a vital role in winning the Battle of Britain.

The move involved thousands of people and put great pressure on Malvern housing and facilities.  Massive building projects were started.  New electric supplies were laid from Worcester & Gloucester. The Malvern Boys College was requisitioned for TRE and huts and laboratories were built in Malvern College grounds.

The workshop for ADRDE at Pale Manor, now known as Malvern Vale, was built in 3 months entirely by women building workers from the Emergency Building Corps. The TRE Engineering Unit (EU) was built in 6 months and was said to be the largest of its kind in the world and Geraldine Hostel, now part of The Chase High School, was built to house the industrial workers at EU.

Why was the move necessary?

Early in 1942, British intelligence needed to know more about the capabilities of German radar. In order to find out, the War Department ordered a Commando raid to be carried out on a German radar installation at Bruneval in February. This was successful and equipment was seized for analysis and prisoners brought back for interrogation.

It became clear that there was a risk of a similar raid on our Research Establishments and German intelligence collection of our radar signals could reveal information about the function and performance of our experimental equipments. The Chiefs of Staff Committee directed the removal of both units before the next full moon, say within 30 days.

This task was given to Captain Spencer Freeman of the Emergency Services Organisation (ESO) of the Ministry of Aircraft Production, which was concerned with the repair, construction and reconstruction of war production factories.

He went to Swanage to see what was involved and was given a list of schools and partly completed hospitals in the West of England. None proved suitable, but Malvern was mention as a possible site, so he drove up immediately and was at the Police station before noon. The Superintendent directed him to the local office of the Ministry of Works and Buildings, ran by a Mr Pettifor, who was out fishing on the Severn at the time.  He was, however, found and he returned immediately to answer many questions of what buildings might be suitable in Malvern. One of the key TRE requirements was that there had to be sufficient elevation to see an aircraft 25 miles away and there was also an airfield nearby at Defford. He was also told that as well as the schools, there was an RAF Signals Training Unit at Pale Manor, Malvern Link.

He quickly had a look at them and the picture was clear as crystal, Malvern College for TRE and Pale Manor for ADRDE. That same night, he returned to Swanage and had a conference with the Superintendants of the 2 Establishments A P Rowe and John Cockcroft, who came up to Malvern the next day and agreed that it was the answer to the maiden’s prayer.

Requisitioning Malvern (boys) College was, however, like asking the King to clear out of Buckingham Palace; in fact that would probably have caused less rumpus. The College had already been evacuated once as it was earmarked for the headquarters of the Admiralty, when invasion was threatened. The Royal family was to be housed, if necessary, at Madresfield Court nearby. The boys had returned for just five terms and the Head Master, Mr Gaunt had been promised that it would not happen again.

Politicians are drawn in

The proposal to requisition the school became a Cabinet issue. The Public Schools Association protested and the Ministry of Works was embarrassed by having to go back on their word. The Under Minister for Aircraft Production was a barrister and a skilled negotiator who needed to get the move approved. The deputy Prime Minister to Winston Churchill was Clement Attlee and he was selected for the point of attack. He had some deep sentimental regard for Marlborough School and he knew that it had been seen as a possible site for TRE and his help had been begged to save the school. The Under Minister told Attlee that he had decided to ask the Cabinet to approve the requisitioning of Marlborough College for TRE and that Malvern was an alternative but not much favoured. As a result, the Cabinet approved the Malvern project!

The immediate problem was to house and feed in Malvern about 1500 TRE personnel consisting of the boffins (a term apparently coined to describe the scientists working in Malvern), their assistants, women of the WRAF, electricians, machinists, fitters, administration and clerical staff, plus a very large force of building workers at Defford airfield.

My first action was to address the Urban District Council to win their cooperation. I swore them to secrecy and told them of the work the two radar establishments, which were coming to Malvern by the direction of the Cabinet. I was greatly helped by the news that morning of the exploits of Lord Beaverbrook’s son, (Lord Beaverbrook was proprietor of the Daily Express and Minister for Aircraft production) Squadron Leader Max Aitken who during the night was guided by TRE designed instrument to shoot down two German aircraft in darkness. The Council listened with rapt attention and promised their utmost cooperation.

Word about “something unusual” had already gone out round the local community whose generous cooperation was demonstrated by the help they gave. This was tempered later by conflicts between the townspeople over billeting and the appearance of so many young men not in uniform.

The Theatre’s Winter garden terrace was converted into a kitchen and the Minister of Food officer was left to find cooking equipment, tableware and all the paraphernalia of a restaurant to feed up to 1500 people three times a day. The restaurant chain J Lyons provided advice and guidance. It was, however, reported by Ernie Putley, one of the scientists transferred, that this did not stop the outbreak of food poisoning in July 1942.

Over 200 electricians were brought in to lay a ring main round the perimeter of Malvern College playing fields with power supplies laid in the laboratory workshops well as the dormitories. Local builders received contracts for the erection of laboratories in the school grounds and converting empty houses into flats for the senior scientists. The Army laid barbed wire fencing round the College. Later, high capacity electrical lines were laid in from Gloucester and Worcester for TRE at Malvern College and ADRDE at Pale Manor respectively. The workshop for ADRDE was built in 3 months, entirely by women building workers from the Emergency Building Corps, and  Geraldine Hostel (the remains of which now form part of the Chase School) was built to house the industrial workers.

In Malvern good progress being made, Miss White, principal of Malvern Girls’ College, billeted a large number of WRAF personnel and set a high standard of discipline with “no necking”. The County Hotel (now Park View) converted a large room into a dormitory for more WRAFs. In the centre of town opposite the Foley hotel, two large shops were converted into the Piers Plowman club for the exclusive use of the Establishment’s personnel.

The original airfield at Defford was bare of buildings and quarters, they had, in a few weeks, to build accommodation for 1500 RAF personnel, several hangers and extensive aprons, hard-standing for aircraft and runway extensions. This required over 5000 building workers, who were housed in over 1000 tents and marquees and fed by the RAF.

The upshot of all the work was that Captain Spencer Freeman, who had been in charge of the operation at Malvern, was able to report by 30 May 1942 that the TRE staff and equipment had all been moved and high priority work was already at 70% efficiency. The ADRDE move to Pale Manor was complete and the move of the Telecommunications Flying Unit (TFU) to Defford was completed ahead of schedule.

He was awarded the CBE for his efforts. He stated that the importance of the switch of TRE from Swanage to Malvern was what enabled the wonderful work that the master boffin and the ordinary boffin had been doing to help win the war by scientific me to be continued without interruption from enemy bombers or the fear of an enemy paratroop raid.

Malvern enabled Britain to remain technically in advance of the Germans, it provided the radar equipment that enabled British bombers to cripple Germany’s industrial output, it enabled the RAF to win the Battle of the Atlantic by tracking down the U-boats and, in the final phase of the battle for Europe, radar enabled the British and American bombers to blast the German defences on the French Atlantic and Channel coasts to pave the way for the Allied invasion. It has been said with some truth that the war against the U-boats and in the air was won on the playing fields of Malvern.

The breadth of inventions that then flowed from the successor Government Research Establishments at Malvern and that still continue today with the spin off companies has had a global impact on Science and technology.