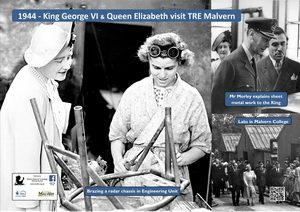 Their visit was to thank TRE and ADRDE for the major contribution they had made to the war effort. 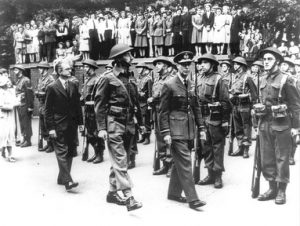 The King  & Queen inspect the Home Guard in the Malvern College grounds. Next to the King is Captain Scott, Home Guard CO and behind is Dr A P Rowe, Superintendent of TRE.

They met with the scientists in the College laboratories and were then driven to the TRE Engineering Unit (EU), which was responsible for providing precision engineering facilities, producing experimental radars and also carrying out short preproduction runs of systems so that it reduced the time it took to get them into the hands of the Services and into action.

They toured the machine shop floor and spoke to many of the workers.

Afterwards the King carried out an investiture in front of EU for Mr Charles Pankhurst from the Model Shop and Chiefly Thomas. 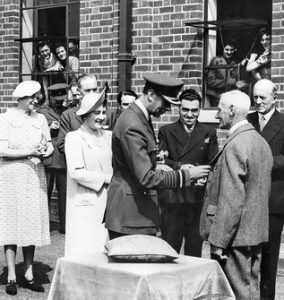 Sir Stafford Cripps was Minister for Aircraft Production and responsible for TRE, Mr Joe Morley was head of EU, Chiefly Thomas, Head of the Heavy Gang (the Heavy Gang was responsible for moving heavy equipment about the site and was still operating into the 1970’s.) and Air Commodore AL Gregory, Air Officer Commanding (AOC) RAF 60 Group, which was the technical, administrative and coordinating heart of the Royal Air Force for radar then known as RDF. In its time, it was by far the largest organisation of its kind anywhere, although similar, but much smaller agencies served the Naval and Army RDF needs.

The Royal Party had lunch in the canteen at Malvern College and then visited the Piers Plowman Club on Worcester Road opposite the Foley Arms. 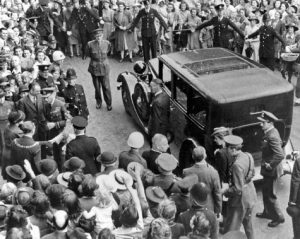 The King is greeted by Major Kendall, Chairman Malvern Council before entering the Club.

The Piers Plowman Club was set up for the scientists and engineers working at the Establishments to provide a social meeting place. They had little time for relaxation as they worked six and a half days a week.