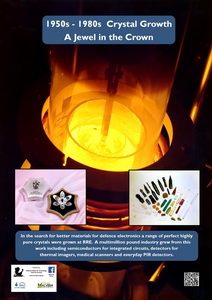 In this poster the main picture shows molten material under precisely controlled conditions from which the pure crystal is drawn.

During the Battle of Britain in 1940 TRE made the world’s first crude, silicon microwave detectors for use in advanced airborne radars. These crystals were known as ‘cat’s whisker’ diodes; they were very impure and consisted of many crystal grains of different orientations, known as polycrystals. Further improvements in purity and structural quality were driven by the invention of the transistor, the solid state amplifier, in the USA, two years after the end of World War II: removal of the grain boundaries to form single crystals of germanium and silicon semiconductors was essential for this new device to function.

At about the same time, scientists at TRE Malvern recognized the need to improve the performance of passive infrared detectors – a means of detecting heat without the detector being detected. The first single crystals of infrared detector materials, lead selenide and lead telluride were grown at Malvern in c.1950.

As the Cold War unfolded it became essential to explore the potential military advantages of the new solid state technology in which single crystal growth played an essential role. RRE Malvern established a world-renowned centre of excellence for crystal growth of a vast range of electronic and optical materials, and was at the forefront of creating crystal growth as a discipline in its own right. The research was usually collaborative with UK industry and led to six Queen’s Awards: ‘A Jewel in the Crown’.

New materials for high performance infrared detectors were explored, including the crystal growth of the compound semiconductor, indium antimonide for detecting hot objects such as the engines of jet aircraft and missile plumes. Detection of objects at temperatures close to room temperature was a more difficult challenge and was given a huge boost when the compound semiconductor, cadmium mercury telluride (‘CMT’) was first synthesised at Malvern. Single crystals of CMT are very difficult to grow but, gradually, the problems were overcome in collaboration with industry. Thermal imaging played a key role in the Falklands Campaign and in the two Gulf Wars. High performance thermal imaging cameras capable of HDTV picture quality are now available.

Other important materials developments made at Malvern and in industry include: infrared transparent materials for lenses and hard protective optical coatings. The development of new materials at Malvern and in industry also made low cost uncooled infrared detectors and thermal imaging cameras accessible to wider commercial markets for use in burglar alarms, firefighting, medical imaging and in environmental monitoring to investigate heat losses from buildings.

The invention of the laser in 1960 initially focused attention on crystals such as garnets and rubies for range finding and other applications. Techniques were developed to grow single crystals of these complex, high melting point oxide materials – a set of such crystals were cut and polished as artificial gemstones and presented to Her Majesty the Queen when she visited the Establishment in 1976 – see picture. 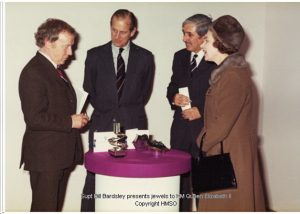 Semiconductor lasers were made in compound semiconductor crystals which were also developed for microwave applications in solid state radars, jammers and wireless communications, notably the mobile ’phone.

Many of the compound semiconductors such as gallium arsenide and indium phosphide dissociate at high temperatures, posing problems that were overcome by the invention of the Liquid Encapsulation, LEC, technique, which enabled the growth of large single crystals from the melt at high pressures. The LEC technique was exploited worldwide on an industrial scale. Low temperature techniques were also developed to grow thin films of silicon and compound semiconductors.

In the burgeoning field of integrated circuits, new techniques were developed and licensed worldwide to control the growth of large, highly perfect silicon single crystals used as substrates to fabricate microchips such as Flash Memories for non-volatile storage of information in mobile phones, tablets, digital cameras and USB sticks.

Behind almost every electronic device lies a single crystal; many of these can be traced to the pioneering work at Malvern!