It had become obvious for some time that Germany could not sustain the war in Europe, but the war against Japan in the Far East could still continue for some considerable time with heavy Allied losses.

When VE Day was over the engineers and scientists at TRE Malvern went back to working six and a half days a week. One of their tasks was to equip the RAF Tiger Force, which was to consist of British Lancaster bombers that would be sent to the Far East to fight Japan. Work at Malvern turned to making the radar and navigation systems, which had been designed for the European Theatre, suitable for operation in a tropical climate. It had been found that these systems had very limited operational life due to the effects of humidity, temperature, mould and insects. Testing in the laboratory and experience in the Far East had shown that damage often occurred in transit and storage. Equipment was subject to tropical testing in specially built chambers and transit containers were designed. It later led to the provision of very comprehensive testing facilities in Malvern after the war and the setting of the Tropical Testing Establishments (TTE) outposts in Khartoum to test dry heat and dust conditions and the West African Tropical Testing Establishment in Nigeria for humidity and fungus growth. 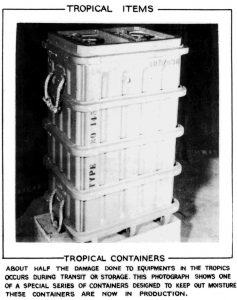 At the time unbeknownst to TRE staff, the US was preparing its most deadly weapon – the atom bomb.

On 6 August 1945, at 08:15, the first bomb “Little Boy” was dropped on the centre of Hiroshima. The resulting blast totally destroyed an area of 1.7 miles from ground zero and the resulting fire storm caused up to 80,000 dead or missing. On 9th August Nagasaki was bombed with the second and only remaining atom bomb “Fat Boy”.

Japan and the Emperor accepted defeat on the 15th August 1945 and World War Two was finally ended.

In the parish magazine of September 1945, the Vicar of Christchurch wrote that now man had invented the atomic bomb it would be produced by scientists of all nations and be so improved that man had invented the self destroying machine. He wondered if it could be controlled and international rivalries, jealousies and national feeling overcome to produce a new era of peace, plenty and joyous harmony

It was an unfortunate coincidence that the announcement of the surrender of Japan and VJ day coincided with the release to the British public of the previously secret story of radar and its part in the victory.

As a delegation of Russian scientists who visited TRE in September pointed out Malvern was now associated with electronic research throughout the world but it was a pity that the news broke on VJ day otherwise it would have been on the front pages of the world’s press. They did however express pleasure at the welcome they had received both by the scientists and Malvern citizens. They were delighted by the number of Russian flags around town and considered that the history of both countries should be taught to children to enable them understand each other although British propaganda had not always been to the Russian’s advantage.

All the national newspapers covered the story, but not all on the front pages. The Times :-

The Telegraph mentions the “Boffins” of Malvern:- 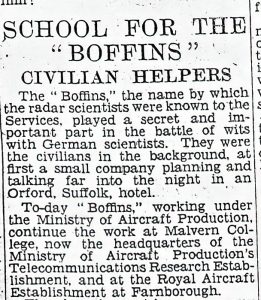 However the Daily Herald gave a more complete story 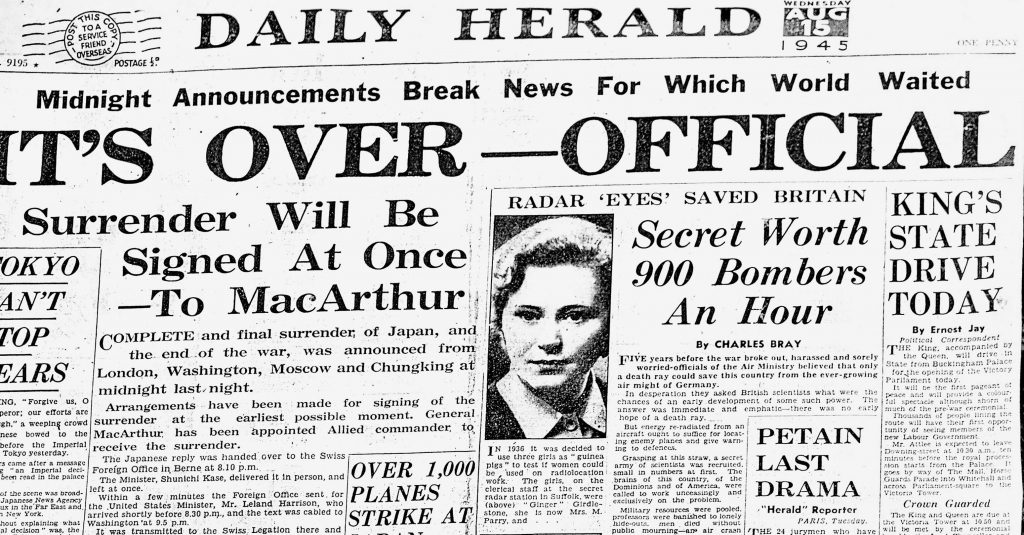 It is a dramatic and romantic story of a battle of wits, brains and inventive genius between the scientists of the United Nations and those of the enemy and the United Nations Team won hands down. Though not impressive to look at the boffins who haunted Army Navy and RAF Stations in usually rather shabby civilian clothes and were ever ready to argue on almost any subject except their own work but generals air marshals and admirals treated them with respect for only the very senior officers knew much of their activities. Theirs was the best kept secret of the war they were conducting what had been aptly described as the very heart of the United Nations war effort.”

The Air correspondent explained “Once upon a time a Puffin, a strange and peculiar bird, was crossed with an obsolete fleet air arm aircraft of equally peculiar habits; and the result, according to Service fantasy was a Boffin. This was a creature of intensive energy, strange appearance and unbelievably inventive capacity, whose eggs as fast as you pushed them away from you rolled back again. That then is the origin of the nickname Boffin given to the civilian scientists who perfected radar.”

From that day to this it should be considered a badge of honour. 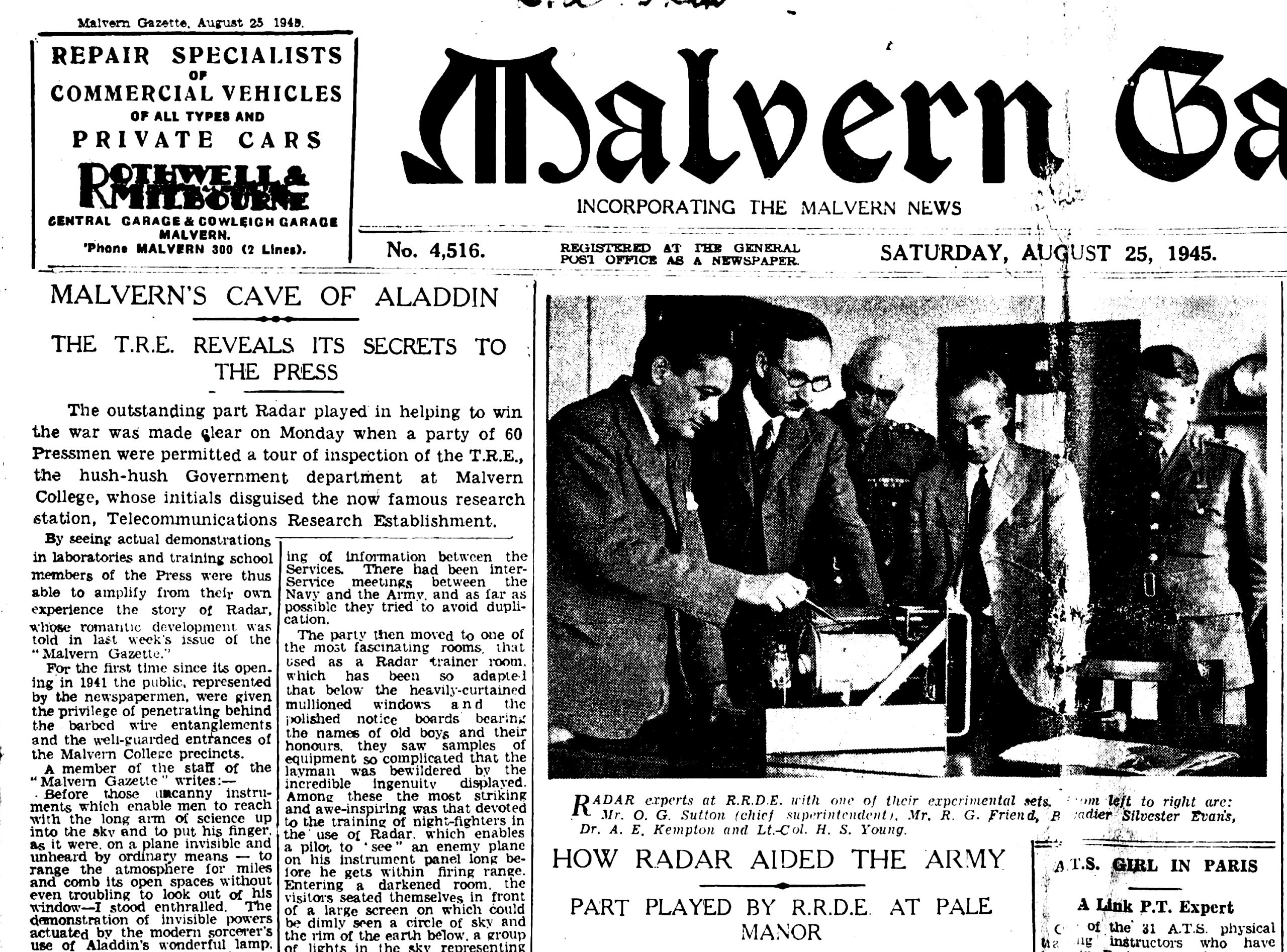 It reported that the VJ celebrations were somewhat subdued when compared to VE day, dampened by the rain in the morning and because most of the Americans Hospital staff had already returned to the US. It was a general holiday, TRE staff had been given two days off so many returned to their homes on the South coast, but the trainee stokers of HMS Dike and the many men of the Dutch forces newly arrived in one of the American Hospitals, only had leave in the afternoon. There was a civic ceremony on Belle View terrace with representatives of all the Armed Forces and led by Chairman of Malvern Council with the flags of the allies — Great Britain, America, Russia and China, unfurled by representatives of Navy (HMS Duke ), British Army (RRDE), TRE and the US Army. In a speech by Capt. H Spencer-Cooper, Royal Navy, he concluded “People of Malvern, you have every reason to be proud of your part in this, let us pray, the last of all wars, and we in the Services will remember all our lives, the hard intensive work and many kindnesses that you have performed.” 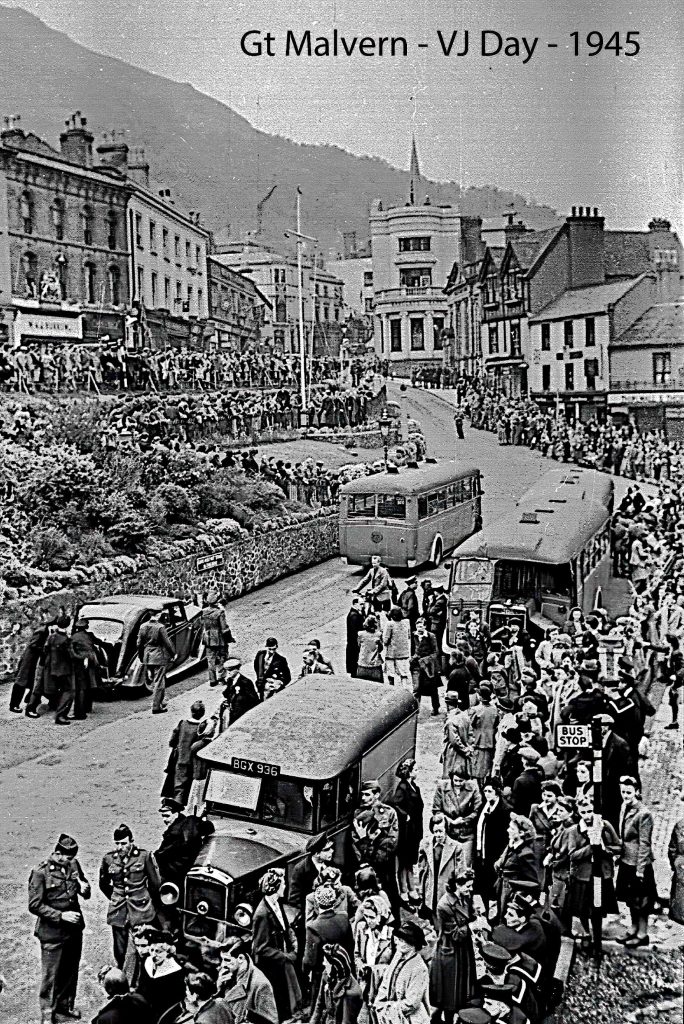 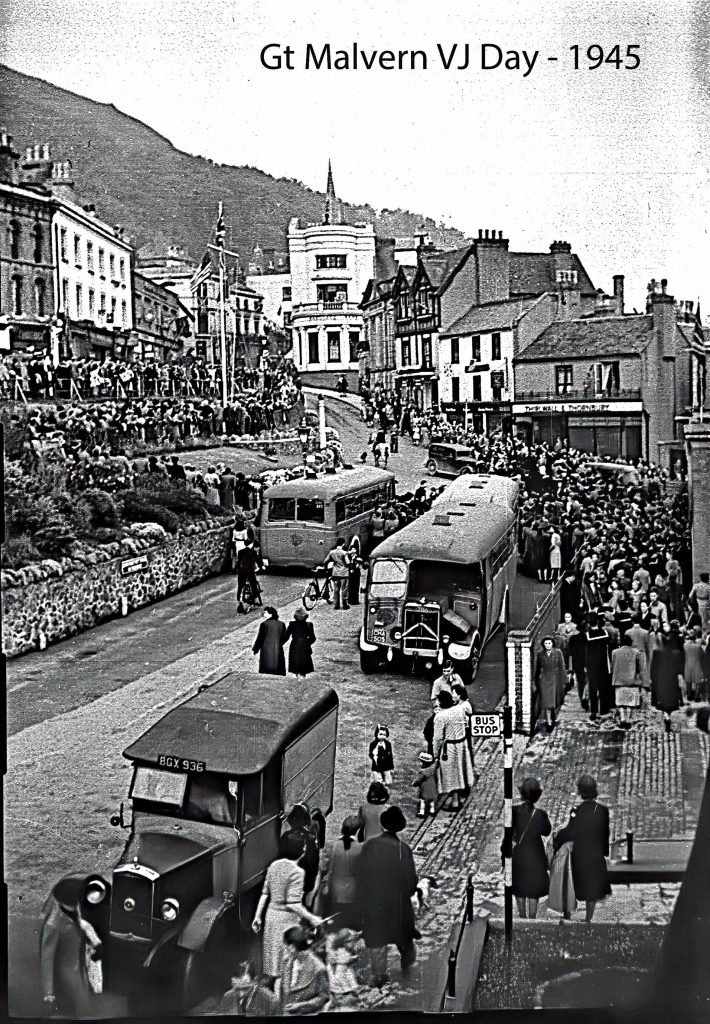 The town had been filling up with many day visitors from Worcester and Birmingham and together with the Malvern residents, Priory Park proved a popular venue where the band of the Royal Marines played. The Geraldine National Service Hostel had a bonfire and provided hotdogs for the 600 young scientific workers. the Piers Plowman club had an informal party with many members of the Armed Forces dancing in the street to relayed music and a snowstorm of paper fireworks into the small hours. In the evening over 4000 people danced to Billy Gammon’s orchestra in the Winter Gardens and Priory Park illuminated with fairly lights. The Abbey was floodlight and there were beacons on the hills as well as searchlights provided by RDRDE sweeping the hills and plains through the night in an ever changing pattern of light in which the Victory V was outstanding.

With the end of the war the Council was very worried about the housing situation, which had been grossly neglected and had reached such a state that many families were living in disgracefully overcrowded and unhealthy conditions. They faced a dilemma in the they could not plan for the thousands of Government Research staff if they had no means of knowing whether they were staying or for how long. . There was also a need to release the requisitioned hotels as tourism would form a major part of the economy. So the fate of Malvern and the Establishments was a constant worry to the staff and Council until a year later on Monday morning 19th August 1946 they received the official news from the Ministry of Supply that TRE and RRDE would remain permanently in Malvern. TRE was busy moving from Malvern College to HMS Duke and most of their staff and those at Pale Manor were pleased at the news. Malvern officials were delighted as they had become so much a part of the community and assured them that their comfort and wellbeing will be one of the main objectives of the Council. The prominent tradesman welcomed the news as it meant that the purchasing power of the community would not decrease and it would enable firms and entertainment organisations could go ahead with future plans.

It is somewhat ironic that 75 years later both Pale Manor North Site now Malvern Vale and most of HMS Duke known as South Site have become or are in the process of becoming housing estates.

However QinetiQ and many local spin off technology firms keep the scientific heritage alive.