Celebrating the End of the War with Germany

At the end of the war Malvern was home to many Government and Military Units. The Telecommunications Research Establishment (TRE) in Malvern College, the Air Defence Research & Development Establishment (ADRDE) in Pale Manor and the Telecommunications Flying Unit (TFU) at Defford had moved in one week in May 1942 to the Malvern area, bringing with them over 2000 civilian scientists and engineers supported by Army and RAF personnel. As the war progressed TRE in Malvern College was home to a contingent of US scientists working together with their British counterparts and the TRE set up a listening post at Guarlford. The Royal Navy had HMS Duke at Barnards Green, which was a stoker basic training establishment (later to become home to TRE). The Admiralty had a high power wireless communication station based at what is now the Morgan car museum. The US military had 5 major hospitals at Blackmore Camp, Merebrook, Brickbarns and Woodfarm, which had been set up to deal with the physical and physiological wounds of the US troops involved in D-Day and the subsequent fighting on the Continent. Close by  at Sledge Green near Pendock was another outstation of TRE manned by the RAF used to trial radars.

Doug Fisher, who was head of the TRE film unit, was out and about with his camera and recorded the celebrations on Victory in Europe (VE) Day (Tuesday, 8th May 1945) and the Drumhead Thanksgiving Service in Priory Park held on the following Sunday.  Many of the TRE civilian VE day celebrations were based on the Piers Plowman Club in Worcester Rd opposite the Foley Arms. It was the social club for all the scientists and engineers employed by TRE and ADRDE.

The sailors at HMS Duke first heard the news on Monday afternoon through a “News and Times” special addition and wondered why the rest of the town was so quite but gradually it started to become more widely known as the American hospitals ordered hundreds of copies for their patients. Flags and bunting started to appear and bonfires built. Somewhat prematurely a bonfire on the hills was lit and caused a major fire visible for miles around “just like the London blitz” said the Malvern National Fire Service chief whose job was to put them out using 25 appliances and all his available men. In fact the many bonfires carried on for a couple of days causing further fires at the Beacon, Wyche Cutting, Suckely and Castlemorton Common. A bonfire on the Wells common was unfortunately set alight prematurely but rebuilt by the children with an effigy of Hitler going up in flames.

The first person the Malvern Gazette reporter saw waving a flag was the daughter of a TRE scientist in her pram. Excited youths set fire to a flag on the chemists shop in the Link. The Unicorn provided drinks on the house in the morning with many Service men and civilians taking advantage of the offer and the Anchor rolled out a barrel of beer for Service Men and Women.

The Theatre had decorated the foyer with flags and flowers with a large picture of the Prime Minister Mr Churchill  holding pride of place.

Early on VE day, two TRE mountaineers from the Club went up the Priory Church and on to the roof of the Abbey Hotel, which was the RAF Officers Mess. They removed the RAF Standard flag and replaced it a “suitable insignia” ( a pair of knickers), The RAF retaliated by kidnapping the brains behind the stunt, removing his trousers and painting a large RAF roundel on a suitable part of his anatomy. He was then released outside Malvern Wells station to the great annoyance of the Station Master. 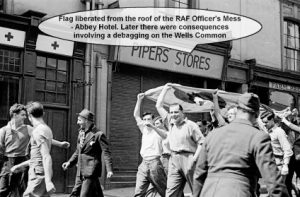 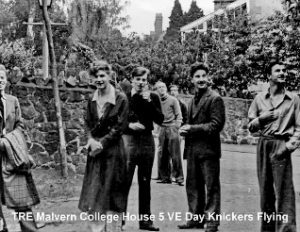 Later on open war broke out between the young scientists and the RAF officers but casualties were not heavy as fire extinguishers are messy but not lethal. However one gallant gentleman tried to improve on these and commandeered a National Fire Service fire engine but he police took a poor view of this and clapped him in the cells for the night. A conference was called and peace was negotiated on the basis of mutual restitution and lessons in fire drill.

A party of youths from TRE paraded round the town with hand bells and a motor horn. 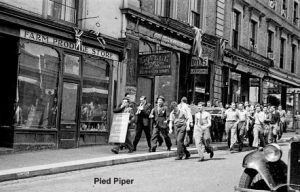 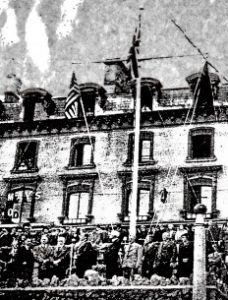 In the afternoon Major Kendall, Chairman of the Malvern Council, organised a flag raising on Belle Vue Terrace by representatives of the three services, Army, Navy and Air Force, who were chosen at random from the crowds to break the three flags of the Allies, United Kingdom, America and Russia. An American soldier in the evening lowed the flag to half-mast in tribute to the late US President Franklin D Roosevelt, who had died in April.

The local MP Maj R Conant sent a message noting that although Worcestershire had been spared the horrors of bombing and the destruction of the V weapons, the contribution of its man and women to the war effort would bear comparison with that of any other county. He said that with the whole of Europe in a shambles only the most prodigious efforts on the part of the Allied nations could save millions from starvation so food production remained of outstanding importance. He hoped that the courage and energy showed by our people over the past six years may inspire them in the years to come.

But these sober thoughts were for the future as on this joyous day Malvern was decorated everywhere with flags and bunting with young men wearing favours and red, white and blue hair ribbons. In fact some of the decorations were so good that they disappeared at the end of the day and appeals were made for their return as the owners wanted them back to hang out when Japan was beaten. 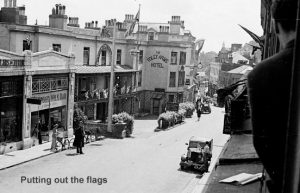 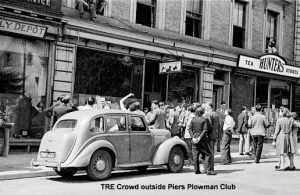 There was dancing for hours in the main Worcester Rd outside the Piers Plowman Club with Club members and passers by. A party of young men from TRE, one with a trumpet, led the dancing 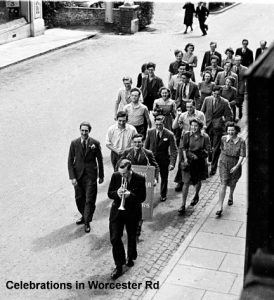 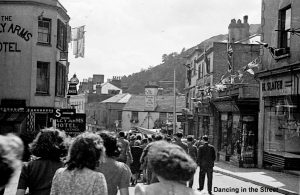 The Club provided free food and drink throughout the day.

Ernie Putley recalled that the whole membership of the Club turned up together with friends, dogs, ancient retainers and hangers on. He remembered the unforgettable experience of dancing an Eightsome Reel with a Welsh girl in the road and half on the pavement. The crowds became so great that the Warden sent for the Police to control the throng but she was told to deal with it herself as none were available. She laid on black coffee which was tenderly administered to deserving cases. Later on in the afternoon it grew quieter and some responsible members decided to clear up the mess littering large portions of the Worcester Rd.

They collected a large heap of rubbish and it would have been a simple matter to burn this in the middle of the road but the law belatedly appearing, objected. Stating  “Carry it inside – you wouldn’t want to get your Warden into trouble for causing wilful damage to His Majesty’s tar macadamised highway”

The party in the evening became a raucous but jolly affair. 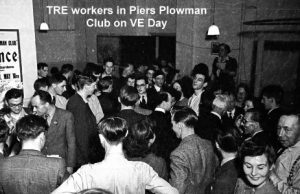 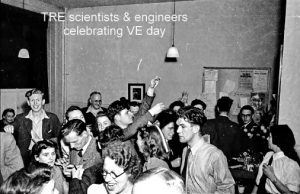 In the early evening the Gazette reports “there was a large crowd in Priory Park, including many children, listening to the HM Marine Band from HMS Duke delighted with a varied programme of a truly Allied flavour. British, American and Russian composers were featured and there were some gay tunes to set the people humming.”

Later a dance was held at the Winter Gardens with over a thousand people attending with Billy Gammon’s band providing the music. The hall was decorated with a large V in red, white and blue lamps and the band wore matching ties. The bar with waiters in white jackets was extremely popular 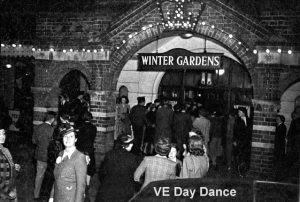 The park remained open to a late hour when several hundred more people turned up and made merry. High spirits characterised the evening and many people danced out into the park and utilised the specially illuminated bandstand and paths for dancing. 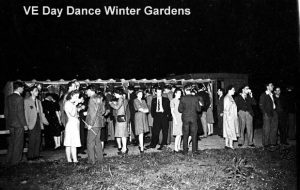 The Priory Church was floodlit and Belle Vue Terrace was hung with lights. Rockets and flares were set off  and the Malvern Hills were illuminated by searchlights with the Beacon crowned by a brilliant V sign from time to time, all produced by four searchlight crews from ADRDE who had given up their own holiday.

The Gazette records at the end of the day:-

“On the Wyche cutting could be heard the sound of a Nightingale in full song mingling with the noise of revelry coming from the town and the hospital camps below twinkling with lights, symbolising for many the joy felt at the cessation of hostilities”.

There was a grand parade through the town headed by a police escort and the service in Priory Park was attended by representatives of various detachments of the Services including the American forces  from the hospitals with US bands and the Royal Marines from HMS Duke. The Home Guard, Special constables, TRE Air Ministry police (known as Warders), Civil Defence, Women’s Land Army, Voluntary Land Club and the Scouts joining in with Major Kendall, Malvern Council Chairman taking the salute on Bel Vue Terrance. 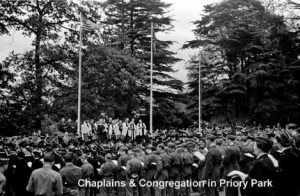 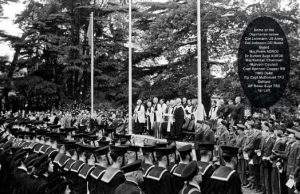 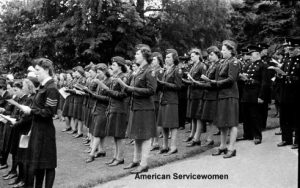 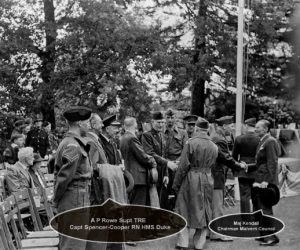 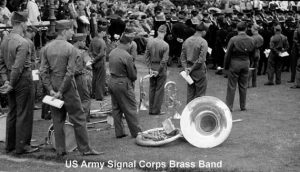