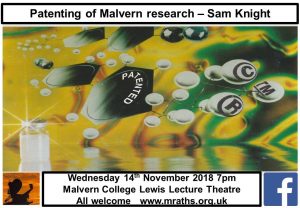 Over 50 attendees enjoyed learning about Malvern’s impressive patenting from Sam Knight at MRATHS’ latest gathering.  Hugh Williams opened the meeting with the sad news of various recent deaths before Roger Appleby covered “Thoughts from the Chair” as Mike Burstow’s recovered from his operation.  Roger described recent activities, including MRATHS’ Church Walk posters and Boffins Day, before demonstrating how easy MRATHS’ wiki is to use. 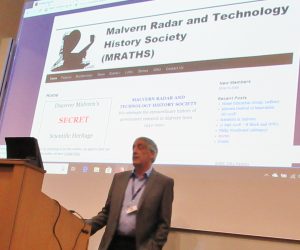 Hugh continued with his mystery photos and objects including an intriguing box (containing a pristine Gee set) and a crashed ‘plane entangled with cables whilst flying locally at 30 feet during 1940s; Dennis Williams explained the background. 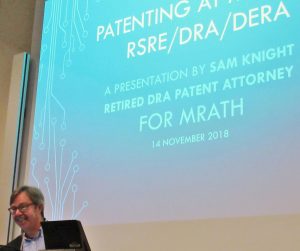 Sam then covered the history, successes and challenges of patenting in Malvern.  An astounding 5-6,000 patents came from “the establishment” (making it one of the world’s most prolific organisations) and that UK generated 54% of all patents in the past 100 years.  Unfortunately, Malvern was “too far ahead of the market” so financial returns often occurred only for the latter years of the patent!

Refreshments provided an opportunity to peruse the Boffin posters and photo albums and for many individual discussions to take place.