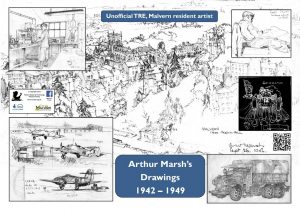 Arthur Williams Marsh worked at TRE and its later incarnations from June 1942 until his retirement in 1978. 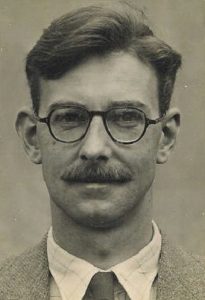 He was born in Walkden in Lancashire in 1921. He attended Manchester Grammar School, matriculating in 1936 and then took up an apprenticeship with the Lancashire Electric Power Company whilst attending evening classes at Salford Royal Technical College from where he obtained his Higher National Certificate in electrical engineering in 1940. When talented young engineers were being sought for the war effort he was recommended by his employers along with his colleague Frank Wolfendale and came to Malvern at the age of 21, just after TRE had moved from up from the south coast.
Upon arriving in Malvern he was billeted with a Mrs Harbage at 10 Westminster Road and subsequently lived in House 5 at Malvern College until moving to the Staff Club on Geraldine Road where he lived until he married in 1954.

His own notes describe the nature of his work from 1942 as follows :
“June 1942 to August 1945 – Worked under Dr FC Williams on radar circuit research and design. This work involved the evolution of new circuit techniques which were passed onto applications groups for incorporation in Service equipment.
August 1945 to December 1946 – Worked on an experimental pulse radio navigation aid for civil aircraft. This included the development of a complete experimental ground station and airborne equipment.
Jan 1947 to August 1947 – On detached duty at Manchester University during the early development of circuits and equipment for an electronic automatic digital computer”. This went on to be the computer called ‘Baby’
He used to joke that he left Manchester University because he didn’t think that there was any future in computers!
He returned to Malvern in August 1947 and continued to work on the “development of a 1000 Mc/s aircraft navigation system with Mr H R Johnson, moving to developing equipment for investigating pulse stretching due to reflections from local objects” in 1948. In 1949-’50 he worked with EK Williams on high mode quartz crystals for the 40-50 Mc/s frequency range and associated oscillator circuits. From September 1950 he moved to work of a “secret nature on aircraft navigation equipment”.
He was a very accomplished artist, recording both the College buildings in which he lived and worked and the people that he shared his time with during the war. His sketches offer a fascinating glimpse of the day to day workings of TRE at that time.