Background
In the early 1960s, Skywave HF was the only effective long-distance radio communications system available to the military. The earth’s first satellite, the moon, is only visible because it reflects light; the idea of exploiting it as a reflector for high-frequency radio waves began to attract research interest in the late 1950s on both sides of the Atlantic. But the moon is not ideal, not least because it is only visible for twelve hours a day, so attention in the UK moved to space junk, the remains of rockets used for space launches. Collaborative experiments between SRDE Christchurch and RRE Malvern in 1965 established the feasibility of using space junk at data rates hundreds of times faster than HF. However keeping track of the thousands of pieces of junk was complicated and because space junk was in low orbits and moved rapidly ground station tracking was also complicated. The real answer was active satellites in geostationary orbits, as had been suggested by Arthur C Clarke many years before technology could provide the capability.
The UK MoD Programme
The UK has been involved in military satellite communications from 1965 when it was invited by the US to participate in their Initial Defence Communication Satellite Programme (IDCSP).
At that time the UK military was looking to improve communications to its overseas bases which were served with low capacity and unreliable HF. Research work had been going on at SRDE Christchurch and RAE Farnborough into the use of the Moon-Bounce and ‘Space Junk’ but the potential of IDCSP convinced the UK MoD to join the programme.
Consequently the UK MoD contracted Marconi (Chelmsford) to build three 40ft air transportable ground stations (SCAT). The first of these was delivered to SRDE Christchurch in time for the launch of the first 8 IDCSP satellites in 1966.
The IDCSP programme, while successful, used simple non-geostationary satellites in near geostationary drift orbits with low gain omni-directional antennas and launched 8 at a time. Building on the success of IDCSP the UK MoD decided to start its own satellite programme called Skynet which called for more a more capable satellite. 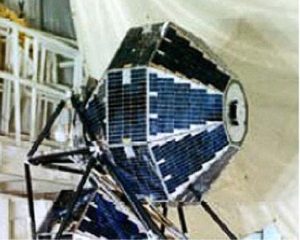 At that time there was insufficient expertise in UK industry to build what was required. Consequently a contact was placed with the US company Philco-Ford to build Skynet 1. The contact also called for UK industry (Marconi Space & Defence Systems) to be involved in order to develop expertise for the future.
Skynet 1A was a geostationary, spin-stabilised design with a directional de-spun antenna giving an order of magnitude increase in capacity over IDCSP. Also the geostationary orbit removed the need for complex ground terminal tracking.
Skynet 1A was successfully launched from Cape Canaveral on a Thor-Delta rocket in November 1969 and became the world’s first military geostationary satellite! Unfortunately all of its Travelling Wave Tube Amplifiers (TWTAs) failed after 18 months. Subsequently this was attributed to poorly soldered high voltage electrical joints failing under thermal cycling. 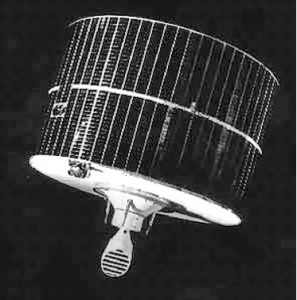 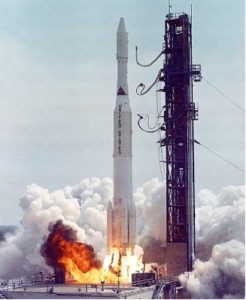 Skynet 1                                                               Thor-Delta Rocket
Skynet 1B was launched in August 1970 but was totally destroyed when its Apogee Kick motor, inside the satellite, exploded during the injection into geostationary orbit.
This was a critical time for the Skynet programme but MoD decided to push on with developing and building the Skynet 2 satellite. This was to be an all UK programme with MSDS who now had the expertise gained from Skynet 1. The satcom teams from SRDE and RAE became the technical advisors to the project office.
Skynet 2 was more powerful than Skynet 1 with 20 Watt TWTAs and more channels. Skynet 2A was launched in January 1974 again on a Thor-Delta rocket from Cape Canaveral. Disaster struck again when the second stage rocket malfunctioned. After the initial assumption that the satellite had been lost it was picked up by the US early warning missile system. It was in a very low elliptical orbit but fully functioning! Attempts to boost the height of the orbit by firing the Apogee Kick Motor failed and it burnt up in the Earth’s atmosphere somewhere over Tibet!
Nevertheless MoD kept faith and Skynet 2B was launched on 22nd November 1974 and worked perfectly! Skynet 2B carried on in service up to 1988 and was still functioning in 1994 when RSRE Defford checked it out 20 years after launch. 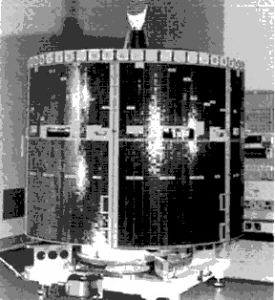 There was to have been a Skynet 3 and indeed it proceeded to completion of the final design and project definition. However the change in MoD’s policy and the ‘Withdrawal East of Suez’ meant that we no longer maintained strategic overseas bases and the original rational for Skynet disappeared. MoD’s satcom requirements were then met by Skynet 2B and use of the US DSCS (follow on from IDCSP).
The UK maintained its satcom expertise in SRDE, RAE and ASWE by becoming involved in the NATO satcom programmes. By 1980 technology had progressed and much more powerful and capable satellites were possible. This opened up the possibility of using satcom for more tactical communications to much smaller terminals on land, sea and air rather than being restricted to large terminals on strategic bases. Consequently MoD changed its policy and the Skynet 4 programme was born. The contact was finally awarded to a BAe/MSDS consortium with Bae using a Eurostar Bus and MSDS providing communications payload.
Skynet 4 was a big step up in capability with more powerful TWTAs, spot beams, a jam resistant nulling antennas and on-board signal processing. UHF transponders were also added to meet submarine requirements. It was also full 3-axis stabilised rather than spin stabilised. The original plan was to launch them using the Space Shuttle and indeed US invited the UK to nominate ‘mission specialists’ to be crew members on each of the three planned launches. However this was not to be following the Challenger Shuttle disaster. This delayed the launch of Skynet 4A and MoD looked for a launch on Ariane. To keep options open Skynet 4A was kept in a Shuttle launch configuration while 4B was modified for an Ariane launch.
Skynet 4B was finally launched on Ariane from Kourou in December 1988 followed by 4A a year later after the US decided to change its Shuttle foreign launch policy. Due to the large increase in MoD communication requirements the need for more capacity in wider theatres of operation Skynet 4C was launched in January 1990 once again on Ariane. 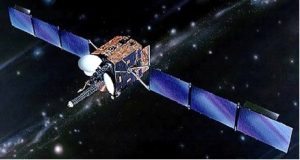 During the whole Skynet 4 period all the specialised in-orbit testing was carried out from the RSRE Defford facility which had moved from SRDE Christchurch in 1980. The Defford facility was also used as the primary operational back-up to RAF Oakhanger in Hampshire.
The Skynet 4 programme continued with Skynet 4D, E & F the final launch being in 2000. This period saw an explosion in the use of Skynet and it became the primary high capacity communications system for all three services in all theatres of operation including the Falklands, Bosnia and the two Gulf wars.
By this time MoD considered Satcom to be a mature technology and decided to procure Skynet 5 as PFI project. The main UK satellite contractor was now Astruim and a new company called Paradigm was created to lease services back to MoD users. Paradigm decided that it did not need the Defford facility and it closed in 2005.
Five Skynet 5 satellites were built and launched between 2007 and 2012 on Ariane with increased SHF and UHF capacity together with reconfigurable phased array antennas to meet changing requirements. 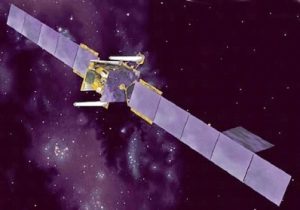 A contract for the first Skynet 6 satellite has been placed with Airbus Defence & Space as an interim stopgap with the intention of moving away from PFI and reverting to a conventional procurement. The first satellite ls planned to be operational in 2025.
Dick Harris
July 2018