“Is my teacher ‘hot’?” is not a question students often ask at school, but it would have been entirely appropriate for a session on infrared organised by Nick Pett at the Wyche School in Malvern recently.  David Whitaker and John Gillham visited the school to talk to Years 4 and 5 as a part of their studies into World War 2 (WW2).

David explained about the development of radar, the move of this secret work to Malvern College during WW2, and the impact of this influx of leading scientists and engineers on Malvern.  He then explained how this work moved to the site currently occupied by QinetiQ and how it expanded into other technical fields whilst continuing to develop the reputation of Malvern as a centre of excellence in innovation.  Students were keen to ask and answer questions and especially enjoyed mimicking a radar with their loud shouting and listening for the echo – although the other classes must have wondered what was going on!

John took over and explained what infrared was and how Malvern had played a leading role in developing infrared detecting technology.  He described the widespread need for and use of this technology.  The students were fascinated by the equipment that he had brought along to show them. 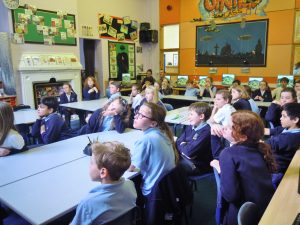 The class then split into two with both David and John taking a half each for further experiments involving infrared video cameras before the students swapped groups.  There was also time for every student to see themselves on the screen in hot and cold and to have fun with invisible heat showing up on the screen.

David and John are founder members of the Malvern Radar And Technology History Society (MRATHS – https://mraths.org.uk/) that aims to celebrate the scientific and technical achievements influenced by Malvern since 1942.  They have held various sessions with different schools and age groups and would be pleased to visit other schools for similar events.