Currently we have over 100 members and the numbers are growing. Most but not all have professional or family connections with the past establishments. We welcome anyone over the age of 18 who has an interest in our work. Non-members are welcome to come to one of our meetings to help them decide whether to become a member.

We depend on our members subscriptions to fund materials for our exhibitions and educational work. Many contribute to our archiving and research as well as helping with displays.

As a member you will receive advance notice of visits and talks for members. Our archive includes a wiki which has member only access. Members can edit or just browse this resource. We are building a photo gallery for members which we plan to open in 2018.

Physical access to the archive, which is kindly hosted by QinetiQ, can be arranged by prior appointment by contacting a Society Committee member through this website.

Can you help achieve our ambitions? 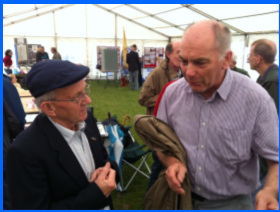 You could:
· Come to our lectures to learn more.
· Join our society.
· Tell us your story.
· Donate items such as artefacts, letters and photos.
· Help to catalogue our collection.
· Tell our story to schools.
· Offer a donation or bequest.

2 Responses to Our Members