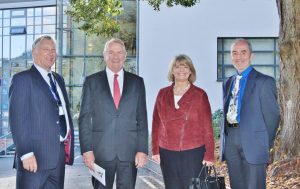 A new exhibition, which celebrates the role of Radar research scientists in the Second World War based at Malvern College, was opened at a special launch event by West Worcestershire MP Harriett Baldwin on Saturday 15th October.

The presentations took place in the recently opened state-of-the-art Malvern College science centre, adjacent to the original building where much of the wartime research took place.

Harriett Baldwin, MP for West Worcestershire, commented: “I was delighted to open this exhibition to celebrate Malvern’s remarkable and historic significance in science and technology and the brilliant brains that kept our nation safe.

“I am pleased that Malvern College continues to be a centre of excellent training for young scientific minds. The new science centre provides outstanding teaching and resources to university standards and plays an important role in nurturing scientists of the future.”

Some of the guests, now in their 90s, were part of the original Telecommunications Research Establishment (TRE) team of nearly 3,000 scientists whose laboratories were evacuated to Malvern College and the Pale Manor from May 1942 until after the war.

These wartime pioneers gave their best years to an electronic system that, besides frustrating bombing raids on cities and submarine raids on shipping, also laid the basis of many facets of modern life – including air traffic control, satellite communication, even the microwave oven.

Their radar research played a crucial part in the winning of World War II as their work swung the balance in the Battle of Britain and the buildings of Malvern College were used for meetings and research.

Dr Natalie Watson, Malvern’s Head of Science said: “Mathematics and Science at Malvern College have always been very strong with the majority of girls and boys studying these subjects right through sixth form. The hosting of this inspiring exhibition and the involvement of our students helps them to realise that there are all sorts of exciting careers awaiting them and a variety of employers eager to discover their skills”.

“MRATHS celebrates Malvern’s technological heritage and focusses on sharing that knowledge with others and especially with students. We are grateful to Malvern College for hosting this event and to our MP for opening it,” said David Whitaker, the Schools’ Liaison representative for MRATHS.